Emily Medlock
Emily is a freelance writer who dresses up for fun. She enjoys putting on a costume and playing around with it. She loves "playing make-believe", and even had a fantasy-themed wedding. She advises that you should choose a costume you believe you can pull off so you can have the most fun with it! In her spare time, she enjoys playing RPG and survival games.

If you are looking for Black Widow cosplay costume ideas, you’ve come to the right place. Natasha Romanoff is one of the best characters to hit the MCU, as she is a symbol for strong women everywhere.

However, Natasha has been around since 1964. So, she’s more than just a member of the Avengers or a new self-titled movie for comic book fans. No matter when you became a fan, though, you have every right to cosplay Black Widow – and so you shall.

Natasha is on my list of potential cosplay options, but I prefer to wait until the popularity has gone down because I like to be the only cosplayer who chooses my character in the room. But there’s a time and place for everything, and today may be the day for you to cosplay Black Widow.

Who is Black Widow? Getting Started with Her Cosplay

Black Widow – or Natalia Alianovna “Natasha” Romanoff – is a vital member of the Avengers. She grew up being groomed to be a spy and an assassin by General Dreykov. Although her real parents are never named, she was adopted by Alexei Shostakov and Melina Vostokoff, who she often considers her parents.

While many see Natasha as a “member” of the Avengers, she was actually one of the founders. In fact, it was her that recruited Tony Stark and Bruce Banner. There’s a lot to Black Widow’s story, but today is not the day for spoilers.

Not everyone has time to create their own cosplay, and that’s okay. Never let anyone make you feel bad about buying a costume. Cosplay should be fun, and anything that makes it less than that is not okay.

If you want a simple single buy outfit, then this should do it. You can get it in four different sizes, and you shouldn’t need to buy anything else aside from a wig. All of the accessories are right here with it.

The downfall to this outfit is that unless you do some work on it, you can’t really reuse it again later. However, you can cosplay Black Widow with it at multiple conventions, which is a common concept. 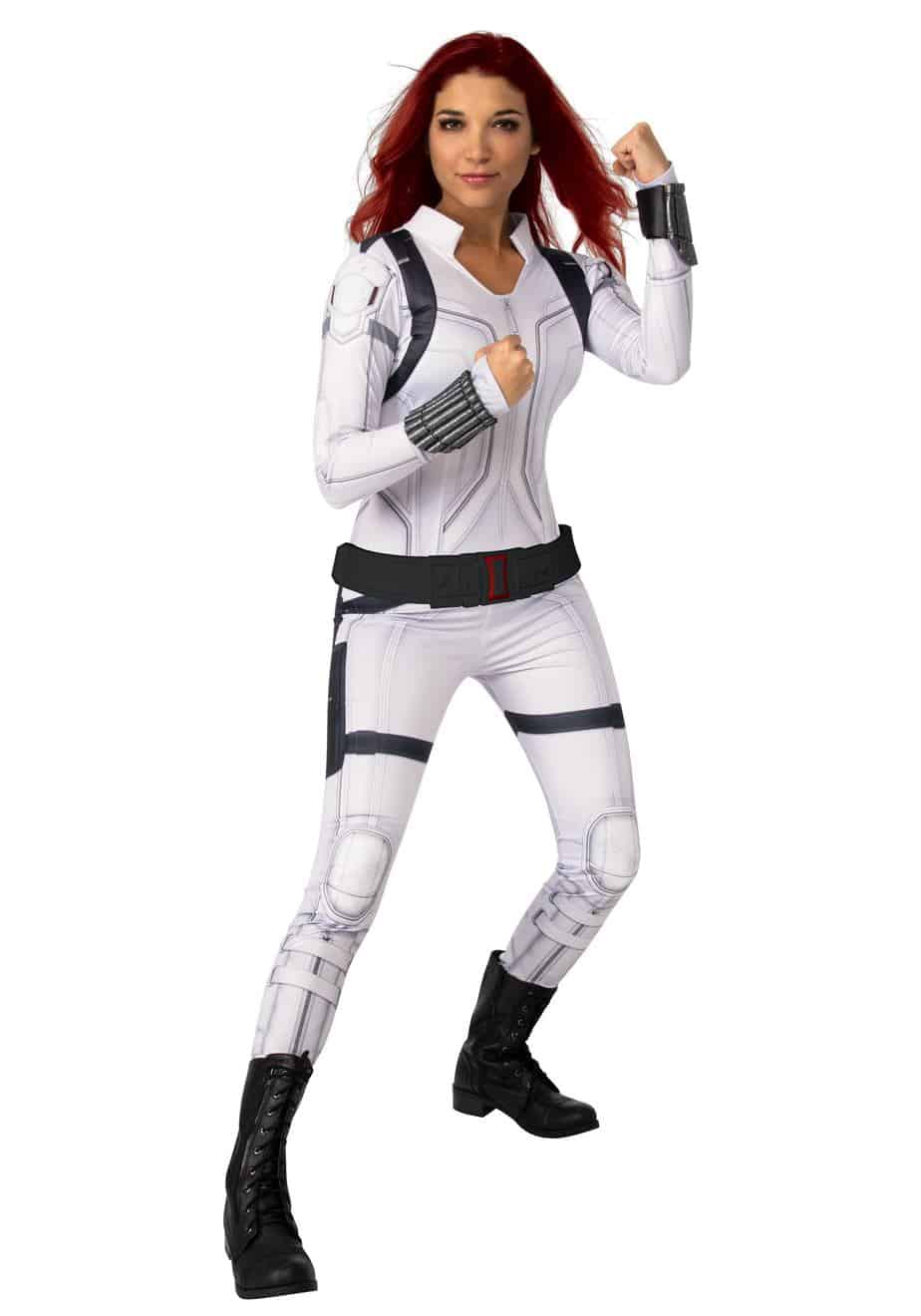 This is my favorite Black Widow outfit of all time. I love a white suit or an all-white outfit in general. So whenever I saw this outfit in Black Widow, I fell in love. It’s good to see that it is available online.

I would buy this and wear it on a random day, which is something I do when I find a pre-made cosplay that I fall in love with. Who would know I wasn’t on my way to a convention? 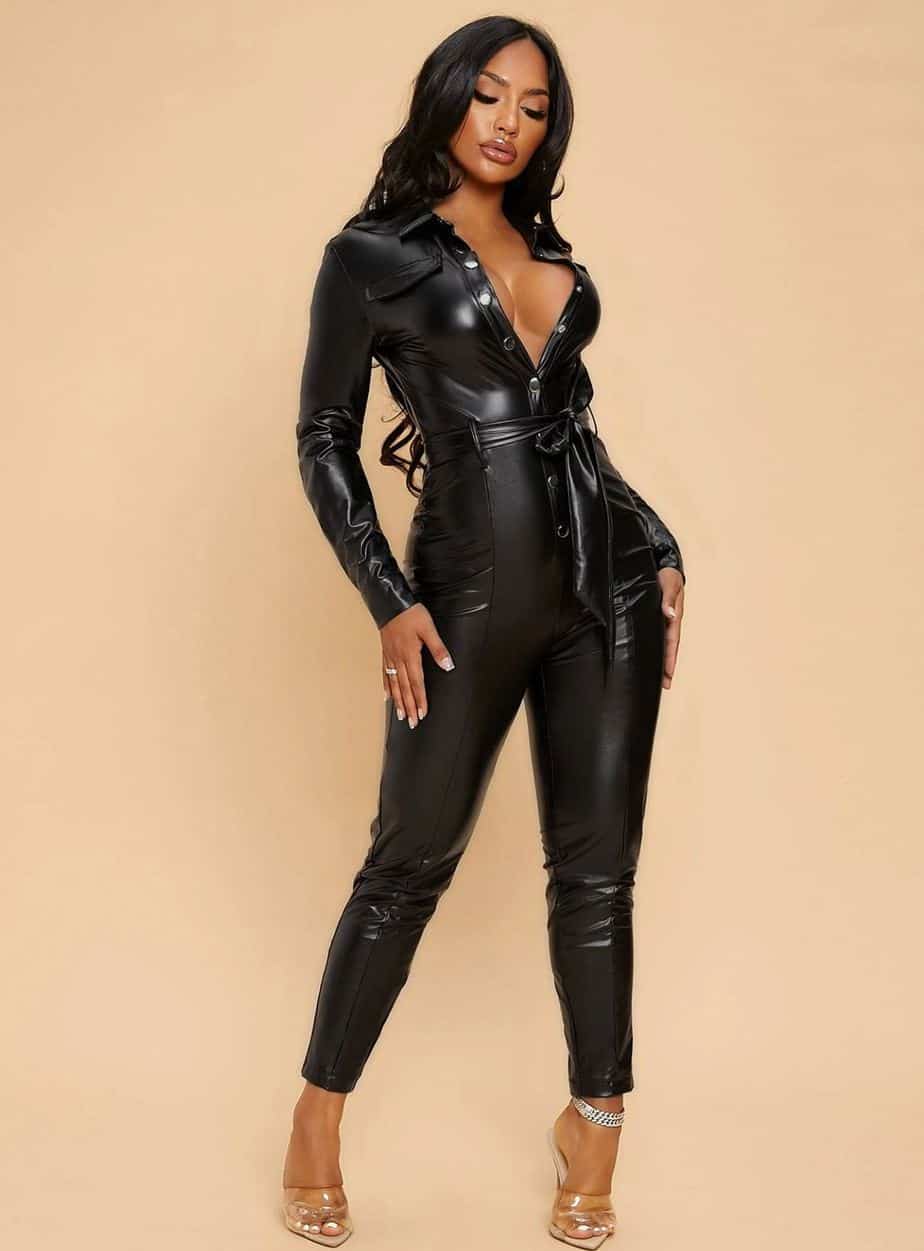 SHEIN is one of my favorite sites to shop – due to its affordable prices and large availability. This leather one-piece is so versatile. You can use it for your Black Widow costume and repurpose it for Catwoman, Storm, Kate Beckinsale from Underworld, or even Elizabeth Hurley from Austin Powers.

There really isn’t an end to the cosplay you can create with a leather bodysuit. So get creative. You don’t even have to be a specific character, which is one of the best ways to cosplay when you are short on time.

One of the best ways to take your cosplay to the next level is to get into character. Natasha Romanoff is an extremely fun character to cosplay because you can really immerse yourself into who she is.

Natasha Romanoff does not have powers. Like Hawkeye, she’s just skilled. She is an expert with almost any weapon, she’s highly intelligent, and she is extremely fit. She trained to be adept at anything she went at, and it shows.

You don’t have to have all of her gear and gadgets with you at all times. If you only get one piece, then get either the Black Widow’s Bite or the batons, as they can easily be used to put on a show.

This gives a lot of creative freedom, but the most important part of this is not to take any crap from anyone. Natasha rarely lets someone flirt with her or threaten her without fighting back.

This is something Natasha has done since the start, but it didn’t really have a light shined on it until Black Widow when her sister pointed it out. Study this land and flip technique, and you will get more than a few laughs and claps.

There are many outfits that Black Widow wears in the comics and the movies. However, there is a problem that arises with the more obscure outfits; no one will recognize you, even after being told.

The hair here varies as she wears the Black Widow suit in every movie, and in each, she has different hair. You can get the general Black Widow outfit and choose short blonde hair, dark curly hair, or her classic red hair (either short or long.)

The suit itself is also very versatile. You don’t have to wear leather, and you don’t have to find a suit with a low neck. If you get a few good accessories and the right hair, the world will recognize your effort.

Natasha as a Kid

This will likely be a popular choice for younger fans and even a few older ones who think they can pull it off. The ombre blue and red hi-tops make me feel good, but the story behind her youth does not. Let both of those aspects fuel you to make this cosplay a hit.

If you have two kids who are into Marvel, go ahead and do a sisters cosplay. Natasha and Yelena are so adorable together, and their childhood outfits are really easy to find online.

This is a persona that Natasha takes on whenever she is undercover as Tony Stark’s secretary. There are a few outfits she wears during this time, but two of them stand out to me. Her red dress is stunning and suits Natasha’s favorite persona. The other is her work outfit which has a lot of room to work with and is easy to find.

While she wears pants in the movie, I always saw the outfit with a pencil skirt in my mind. So I believe this is a Mandela effect that more than a few people also experience. This means you can go with pants or a skirt.

There are a couple of outfits Black Widow wears when she is training, but I would go with the simple training outfit the girls wear during their teen years. It looks like a gym outfit. Although this may be mistaken for a dozen other characters, if you do it right, you may be able to let people know who you are in a jiffy.

There is also another Red Room Academy outfit that the girls wear in Agent Carter. However, this isn’t necessarily a Black Widow cosplay, so sticking to one that we’ve seen Natasha in may be better.

This is my favorite Black Widow outfit and the one I will cosplay if given a chance. It is just like her black outfit; only it is white. The straps are black, but everything else is white as she had just gone on a mission in the snow and needed to blend in.

If you choose this outfit, you can wear it for a Yelena cosplay as well because she wears the same outfit in the movie. Yes, you can cosplay Natasha one day and Yelena the next. 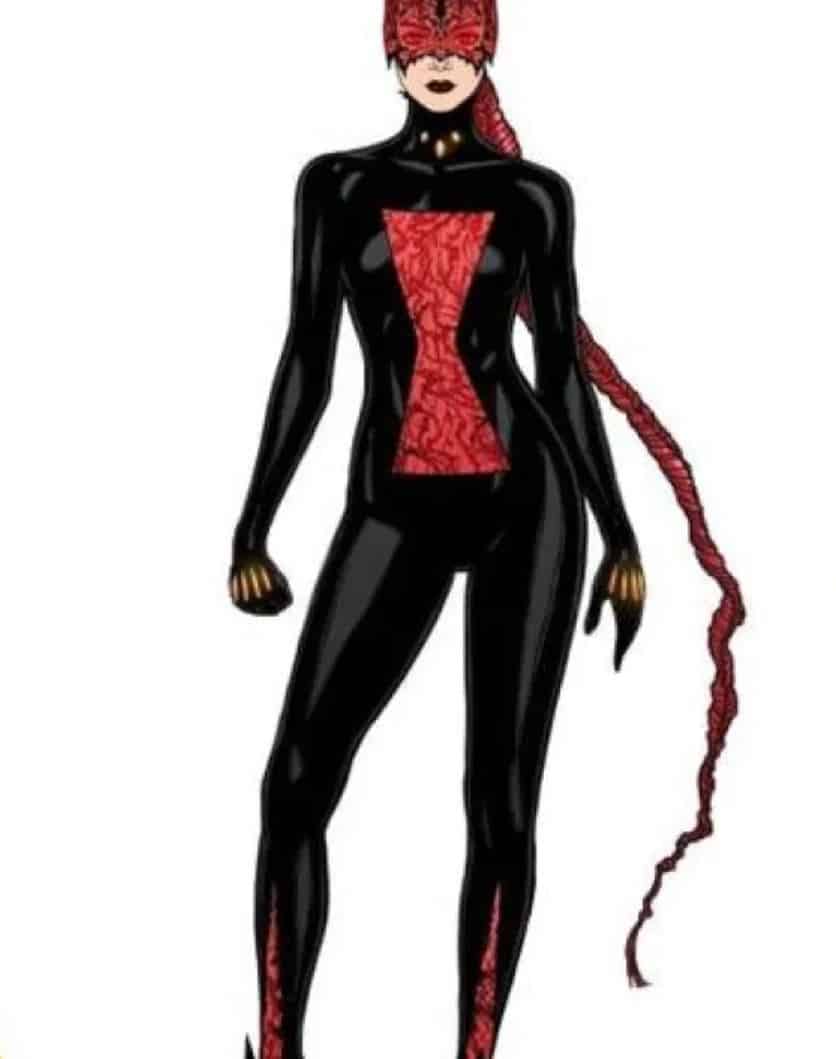 This is a new outfit that Black Widow will wear to X-Men’s Hellfire Gala in the comics. Not many people have seen this outfit, and if you don’t read the comics, you may not be interested. But once you see it, you may not be able to keep yourself from trying to make it. 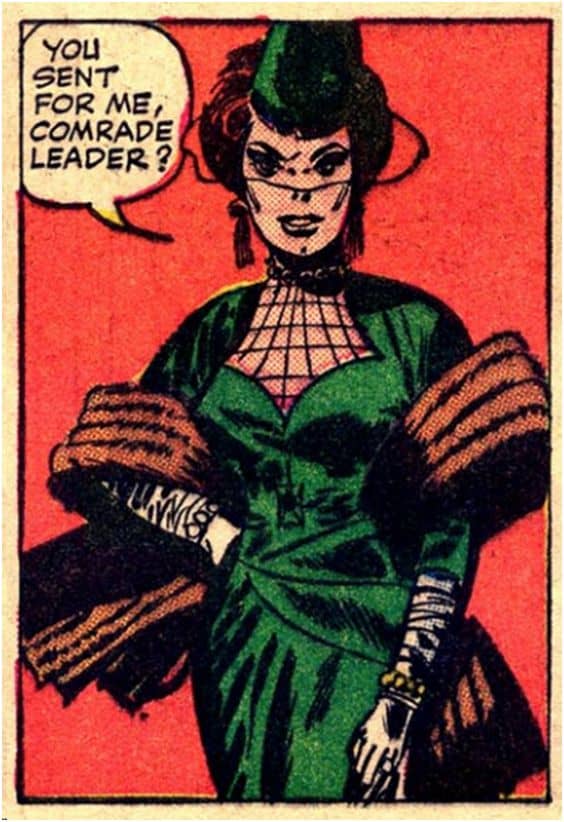 This is another rare option that was first seen in 1964. She was undercover in the 1960s and looked the part in this outfit from Tales of Suspense #52. Although I’m not sure I could take it on, I applaud anyone who decides to do so. I recommend reading the issue if possible because it’s not the only outfit she wears during her debut. She also wears a purple outfit at one point and her classic Black Widow outfit at another time.

Question: Is the Comics Black Widow Different Than the Movie Version?

Answer: In some ways – the background of the character and some of her outfits are different. However, if you want to be recognizable, you should stick with the MCU version, as that is what most people see Black Widow as.

Question: Can I Cosplay Black Widow Without Red Hair?

Answer: Yes, you can. Natasha Romanoff has blonde hair in multiple movies. You can use these versions of her for your cosplay, so you can buy a blonde wig or perhaps no wig at all.

Answer: Yes. In fact, if you know any form of martial arts or weapon arts, you can use it to take your cosplay to the next level. This can earn you a win at your next cosplay convention.

Question: Can Anyone Cosplay Black Widow?

Answer: Yes. Anyone can cosplay Black Widow. Your gender, body type, and skin color are irrelevant to your ability to make a stellar Black Widow cosplay. So don’t let anyone tell you otherwise.

While it may be easy to get into character, getting your costume right can be a struggle. The classic Black Widow bodysuit will be the easiest for people to recognize, but perhaps something slightly more obscure will make their hearts swell with pride.

In the end, the only thing you can do is choose the cosplay that you believe you can pull off and have the most fun with. Black Widow is a great choice, and there are a lot of paths you can take with it. So become Natasha your way.